Need a snack? Here’s two great recipes using everyday ingredients, and while the kids are eating the spaghetti faces the adults can enjoy the baked bean savouries. 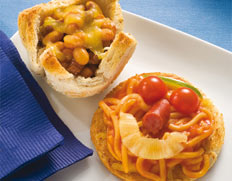