Bookmark has been added

View my bookmarks
Thank you for your review. Please note that all reviews are held for moderation, so there may be a delay before they appear on the site.

Learning: what to expect at four months

Learning: what to expect at four months

At around month four, your baby will be developing an understanding of the basic sounds of language. You can encourage them by mimicking the sounds they make and initiating a few of your own. That means loads of baby talk conversations! This’ll help them interact and recognize more sounds.
Four to six months old: developmental milestones and behaviour 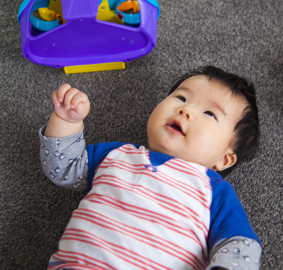 This age is jam packed with fun stuff - you'll really start to notice a little personality developing.
Here's a chart to help you track some of the important milestones at this time, so make sure you have your camera ready to go!

Remember, every baby is different so don’t worry if your baby has other plans and doesn't follow this pattern very closely. 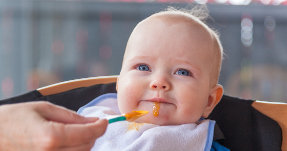 Learning to swallow: the Extrusion Reflex

Learning to swallow: the Extrusion Reflex

How Wattie's baby food is made

How Wattie's baby food is made

More about the next stage of your baby's growth and development

Baby's Teething: a lot to chew on!

Baby's Teething: a lot to chew on!

New textures and flavours: The next stage

New textures and flavours: The next stage